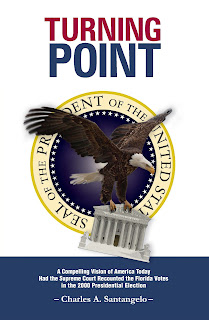 Turning Point Novel Suggests 2012 Presidential Election Shaping Up as Chilling Déjà vu of Recent Voter Suppression Controversies
August 26, 2012 – Alexandria, VA – Turning Point provides a chilling reminder of voting controversies in recent presidential elections and a warning for what could happen again in 2012.  From the critical role of swing-vote Supreme Court justices to current concerns over voter suppression and voter identification in key battleground states, author and political veteran Charles A. Santangelo writes a thrilling political narrative, Turning Point:  A Compelling Vision of America Today Had the Supreme Court Recounted the Florida Votes in the 2000 Presidential Election.
Santangelo’s well-crafted novel is the first book to provide a compelling vision that America would be a far different place today had the Supreme Court decided in 2000 to recount all the rejected ballots in Florida. This powerful narrative is presented through an action-packed love story between a liberal Democratic environmentalist and a conservative Republican Air Force pilot that extols the virtue of compromise, rather than adherence to extreme ideology.
In telling the story, Turning Point answers the great questions of our time.  If a Democrat had been elected in 2000, would we have invaded Iraq?  Would Bin Laden have been captured at Tora Bora?  Would our economy still be flourishing and what would we have done with the projected $4.5 trillion budget surplus?  Would America have turned the corner on global warming? Would the financial crisis have been averted?  Would Israel and Palestine be on a path to peace?
“Recent concerns with voter identification and suppression in Florida, Ohio, Pennsylvania and other states suggest a potential replay of the 2000 and 2004 presidential voting irregularities,” said author Charles A. Santangelo, who has served as a White House aide and in press roles for more than six presidential campaigns.
But Turning Point is not a pessimistic look back at what America could have been if a Democrat been elected in 2000.  Rather, it provides a credible narrative of inspirational leadership in fighting terrorism, combatting suppression of minority voters, and taking on electronic voting fraud and global warming politics.
Turning Point is available on-line in hardcover and paperback through Amazon.com and BarnesandNoble.com (keywords: Turning Point Santangelo).  Trade discounts in quantities of ten or more are available at www.outskirtspress.com/bookstore.  Turning Point will also be available in selected brick and mortar bookstores.
Turning Point format options:
6 x 9 paperback cream            ISBN: 978-1-4327-9396-8               SRP:  $16.95
6.14 x 9.21 hardback with jacket       978-1-4327-9398-2                         $25.95
e-Book, Kindle, Nook                                                                            $  9.99
Genre: Political/Historical/Fiction/Action and Adventure/Romance
About the author:
Charles Alfred Santangelo is a veteran of six presidential campaigns and a former White House aide who has served in senior positions in the Clinton, Bush and Obama Administrations at NASA, the U.S. Agency for International Development, and U.S. Department of Homeland Security.  Mr. Santangelo is the author of numerous articles and has been interviewed by CNN, Newsweek, Time, Associated Press, and other media outlets.  He is a former assistant professor of information technology policy and the Co-Editor/Researcher of the award-winning political biography, Lucky Corner: The Biography of Congressman Alfred E. Santangelo.
To reach the author for interviews contact George Clarke, whose contact information is listed above.  For more information about Turning Point, visit www.outskirtspress.com/turningpoint or www.turningpointnovel.com.
Outskirts Press offers high-quality, full-service self-publishing and book marketing services for writers and professionals who are seeking a cost-effective, fast, and flexible way to publish and distribute their books worldwide while retaining 100% of their rights, 100% of their profits, and 100% of the creative control. www.outskirtspress.com.
# # #
Outskirts Press, Inc., 10940 S. Parker Rd. - 515, Parker, Colorado 80134
http://outskirtspress.com  1-888-OP-BOOKS
Posted by raybeckerman at 1:20 PM No comments:

Posted by raybeckerman at 3:26 PM No comments:

Email ThisBlogThis!Share to TwitterShare to FacebookShare to Pinterest
Newer Posts Older Posts Home
Subscribe to: Posts (Atom)
Banner Photo by Pittsburgh Independent Media Center
*******************
If you would like to be on this blog's email list email me
*******************
I'm on Twitter at @raybeckerman