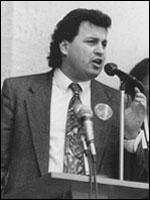 Bob Fitrakis will be speaking on the topic of his recently released book, "Did George W. Bush Steal America's 2004 Election? Essential Documents."

The evening will begin with a presentation by Thom Hartmann on the crisis in America's elections, followed by Bob's presentation and ending with questions and answers.

Bob Fitrakis is the senior editor and manager of The Free Press. http://www.freepress.org/columns/display/3
He was one of the attorneys involved in the lawsuit challenging the result of the 2004 election in Ohio.

He is the author of many articles on election fraud, and has written extensively on the issue of private corporations counting our votes on trade secret software.
See "Diebold, electronic voting and the vast right-wing conspiracy," February 24, 2004
http://www.freepress.org/columns/display/3/2004/834

The following is the link to the Introduction to Bob's recently published book, "Did George W. Bush Steal America's 2004 Election? Essential Documents."

Where: Portland State University, Hoffman Hall (see detailed directions to find Hoffman Hall and parking information at the end of this announcement)

Dr. Bob Fitrakis is an award-winning investigative journalist, attorney, political science instructor at Columbia State Community College, author of seven books, and editor of Free Press at FreePress.org, He is a dynamic and inspiring speaker. He called the first public hearings on evidence of widespread election fraud resulting in vote suppression and unexplained irregularities in Ohio, and leading to the congressional challenge of Ohio's electors on Jan. 6, 2005. He was one of four attorneys who filed a challenge to Ohio’s 2004 election results (Moss vs. Bush). He has written extensively on issues of election integrity, including the threat to democracy caused by private, for-profit corporations counting our votes on trade secret software, leaving voters with no way to verify if their votes were counted as intended.

Thom Hartmann, radio talk show host and author, will begin this informative and thought-provoking event by addressing the crisis in America’s elections, followed by Bob’s presentation, and then questions and answers. Thom and Bob will discuss what needs to be done to ensure that future elections are fair and how each of us can get involved in restoring citizen ownership and oversight of elections.

TO FIND HOFFMAN HALL, and parking information: Hoffman Hall is located on the PSU campus on what would be SW Harrison and 11th Street, but it is inside the campus where there are no streets. Parking is free in the PSU parking structures on Friday evening. Parking structure three is located between SW 12th and 13th and SW Market and Montgomery. From SW 12th and Montgomery, walk one block east and turn right to find Hoffman. From parking structure one at SW Broadway and Harrison, walk four blocks directly west across campus to get to Hoffman. Map of PSU Campus: http://pdx.edu/map.html